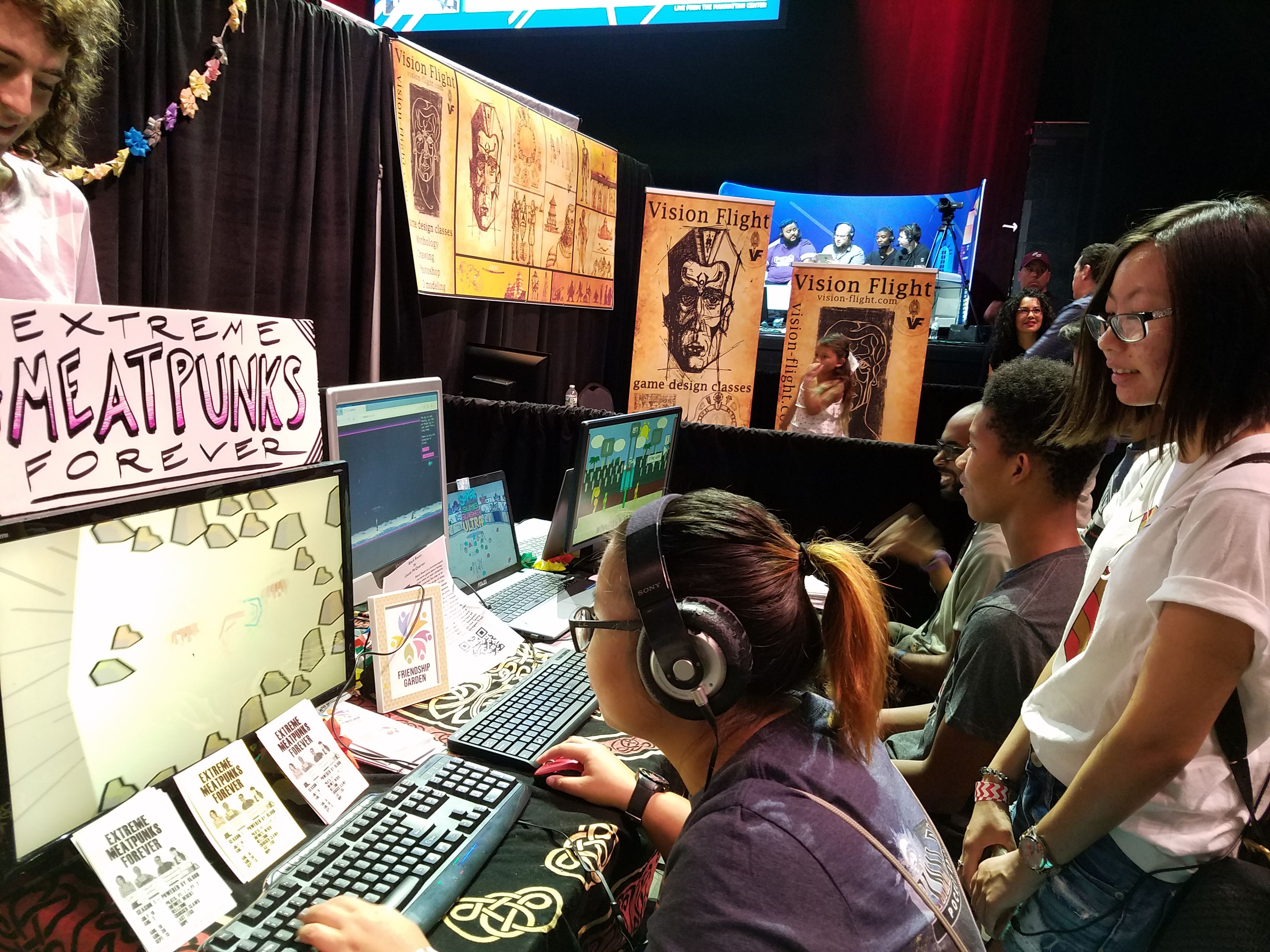 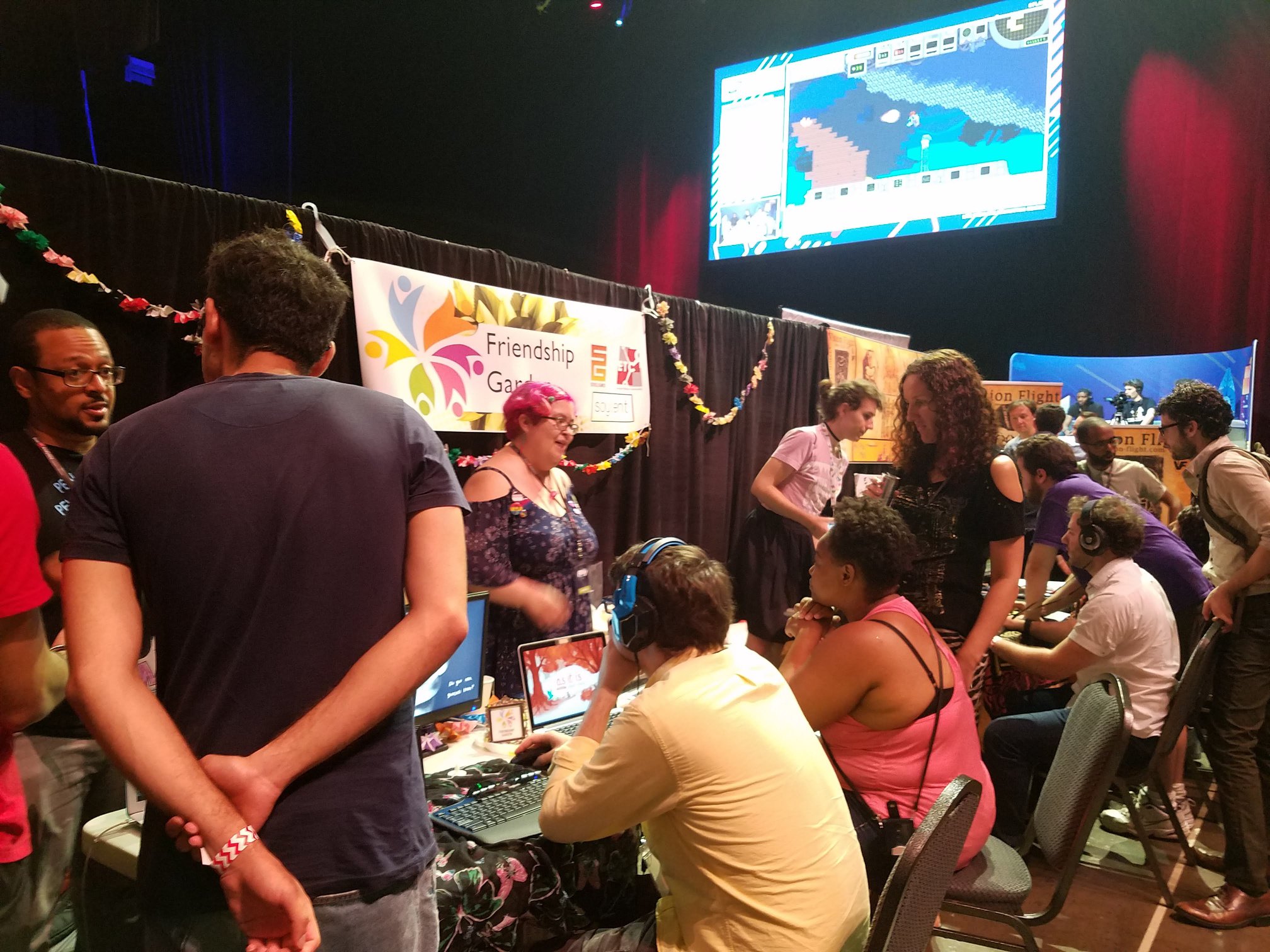 We purchased a booth on the main show floor of PlayNYC to showcase the efforts of some phenomenal game developers that were not able afford the incredibly steep cost of having a presence at the show. After receiving numerous submissions from across the globe, we selected 8 games to be displayed at the booth, and 4 of the developers were able to come on-site themselves to talk with media and players.

The booth itself was an attempt to be a vision of what an inclusive gaming space might look like. Pillows, blankets, and chairs were provided for developers if they needed a break, there were volunteers to take over if someone needed a break, each game had content warnings, and the developers themselves represented a vast array of identities, beliefs, and values. 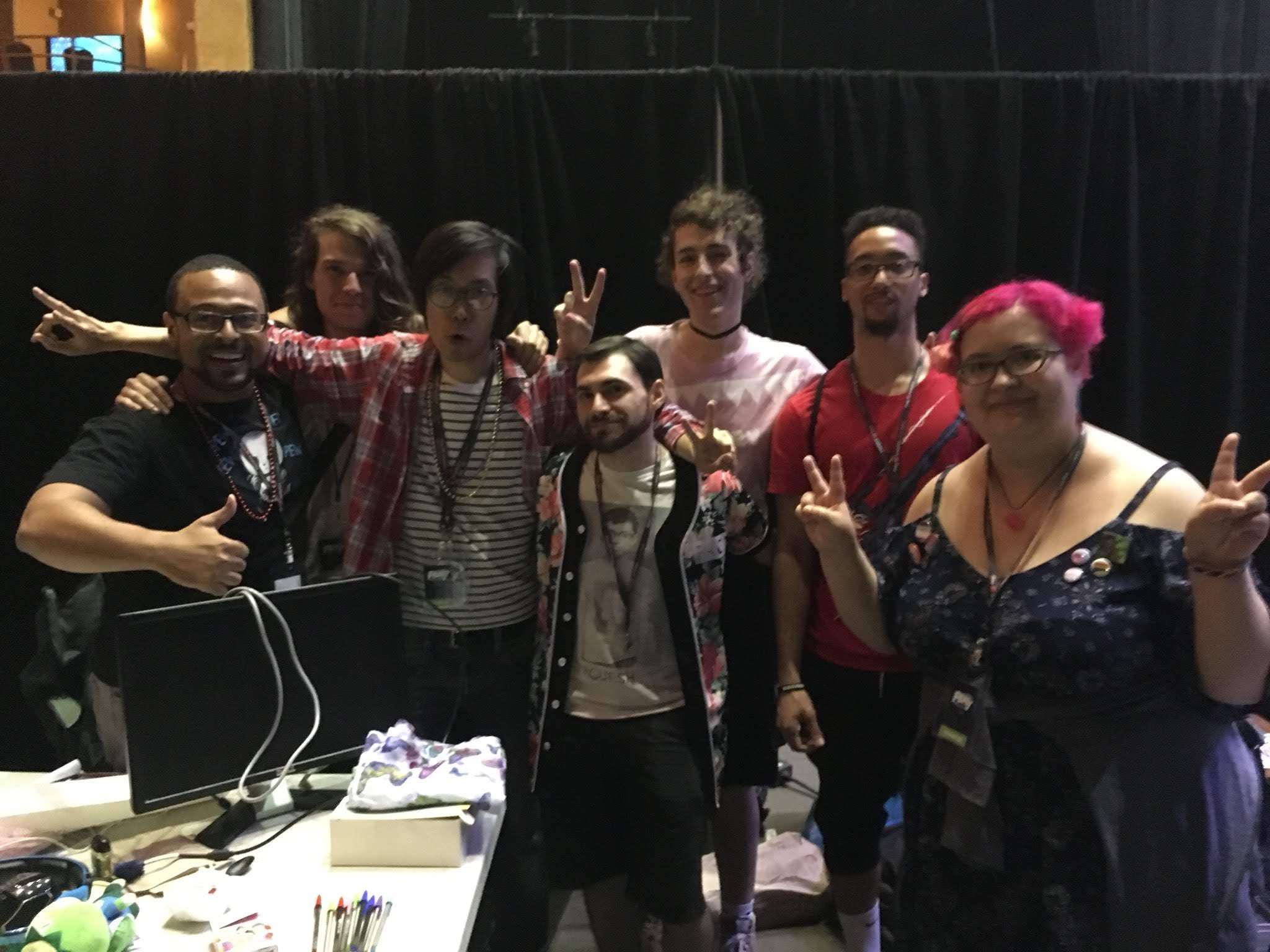 Featuring the Developers and their Games: 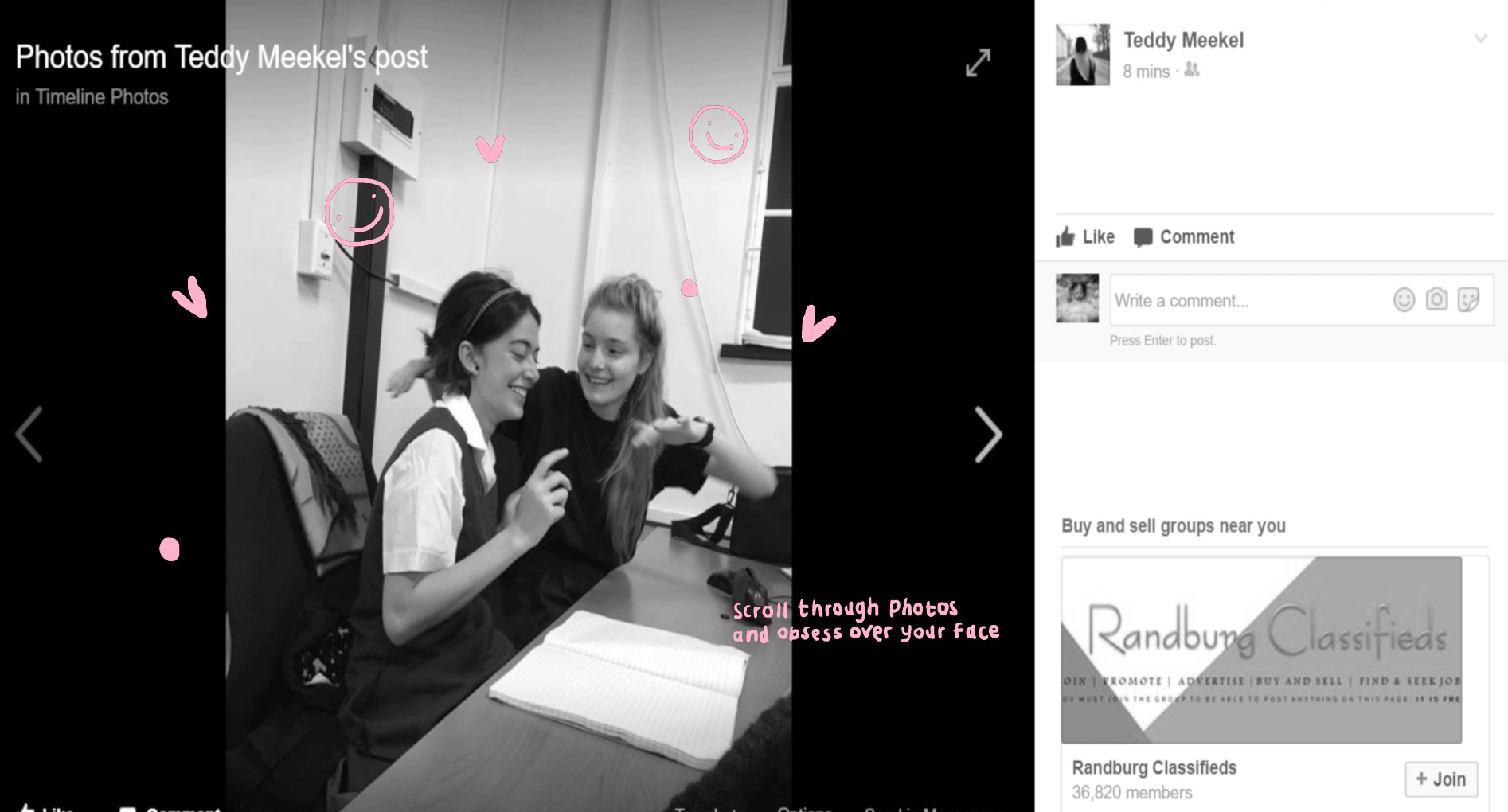 Doesn’t know what’s going on. // Goth gf // Cant stop crying. // Writes poems that are bad. Made 3 nice games. Please let me play bass in your emo band and please also teach me how to play bass. Love u.

Johannesburg based multi-disciplinary artist, student and homewrecker. // Seizing the city is what I do everyday // 9 cats // 1 dog // and a rat problem

A game developer decolonising game design and making media from the margins. They are doing their best to try and spread media across their country and continent that cater to the poor, queer, racially marginalised and other excluded demographics.

A vignette, FMV game that allows players a glimpse into the life of Lilith Gray – a young woman who was molested as a child and suffers from Borderline Personality Disorder as a result. By spending a night alone with Lilith in her bedroom and subsequently, her head, players learn Lilith’s story by adopting a double gaze: that of the player witnessing Lilith’s story and piecing together why she behaves and responds as she does and to an extent, the gaze of Lilith herself. 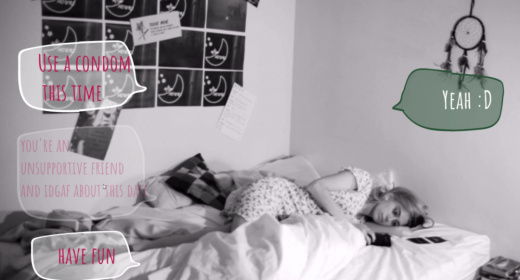 As It Is by Egghouse

A watercolor, storybook-like 2D side-scrolling narrative adventure game about helping small animals with their problems in a society where hunting and killing no longer exist. Follow Hedgehog & Hawk as they meet, learn, and become friends. 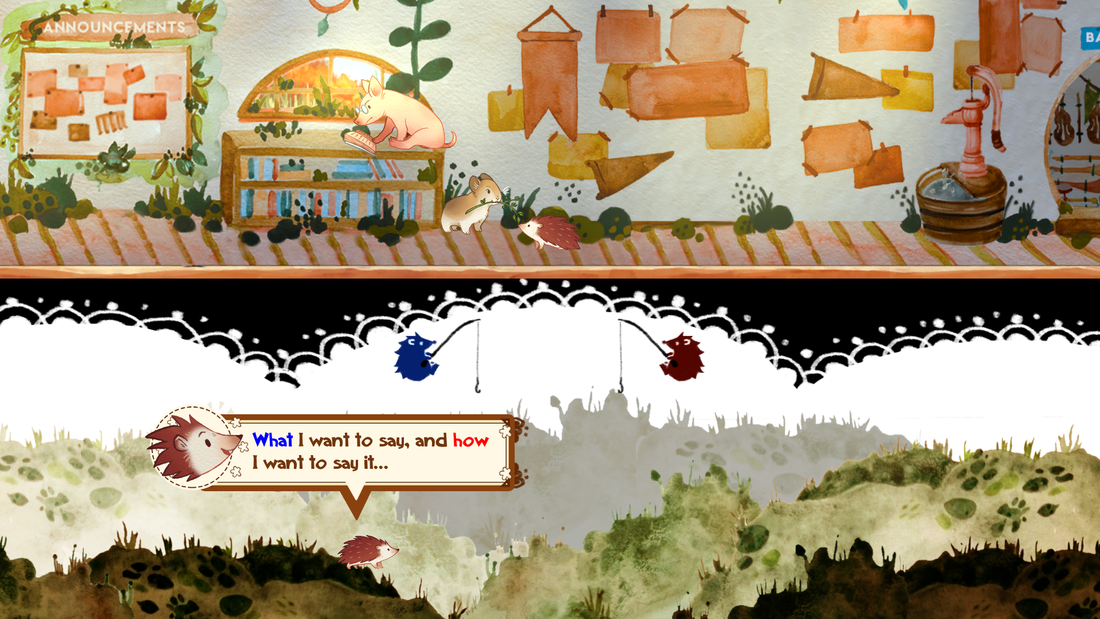 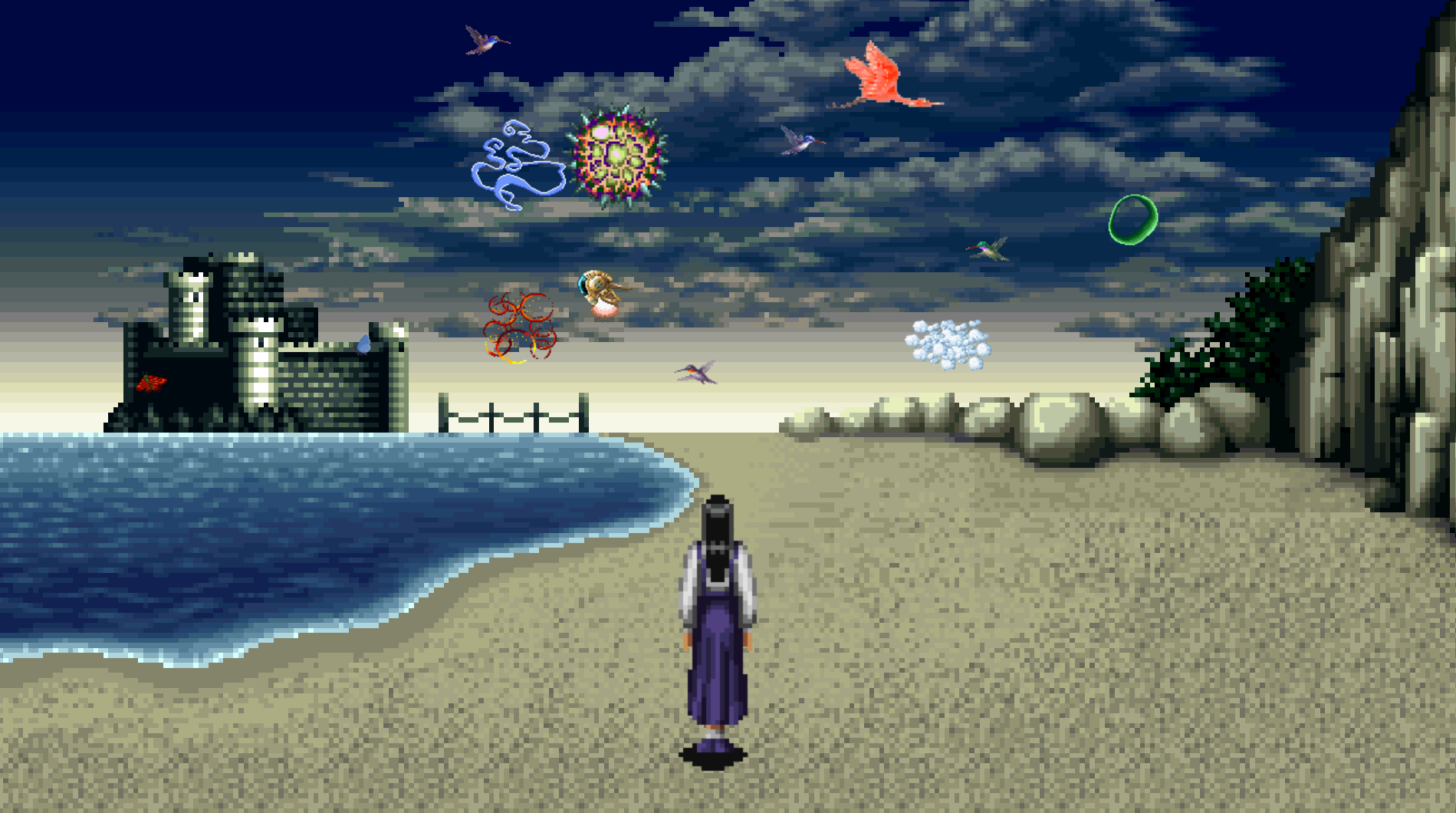 A browser-based, narrative game about falling asleep while on your computer, on the internet. You play as an insomniac on the verge of sleep, moving through states of consciousness. Hallucinatory, pixelated visions appear and disappear as you click through fragile internet spaces. Conceived as a feminist dungeon crawler, Black Room features a female cast of recycled video game sprites from the 1970s-current day, brought together to form new, resilient narratives. Winner of the Nuovo Award 2019.

A new media and video game artist currently living and working in Los Angeles, California. Her practice involves hours of surfing the net, finding artifacts that touch her, and repurposing them as a way to reflect on and reinvent our relationship with interactive storytelling. Her current work, Black Room, is in part influenced by her grandmother, who stayed up every night playing Zelda until dawn.

A queer sci-fi/fantasy Summer school visual novel/dating sim. It also has slice of life elements, queer friendships, mystery, and adventure. There are characters of color, disabled characters, and queer characters of all stripes! Explicit mention and discussion of asexuality and aromanticism!

Also goes by Metaparadox online and is a solo dev of diverse queer narrative games, mostly visual novels and dating sims. She is queer, asexual, Latinx, autistic, chronically ill, a feminist, a secular humanist, a game jam participant, and a lover of DIY and zine culture, and all of these identities and interests affect her work. Olivia is also the founder and host of Ace Jam, a game jam about making games with asexual characters, as well as the admin of a Queer Game Dev Discord server. 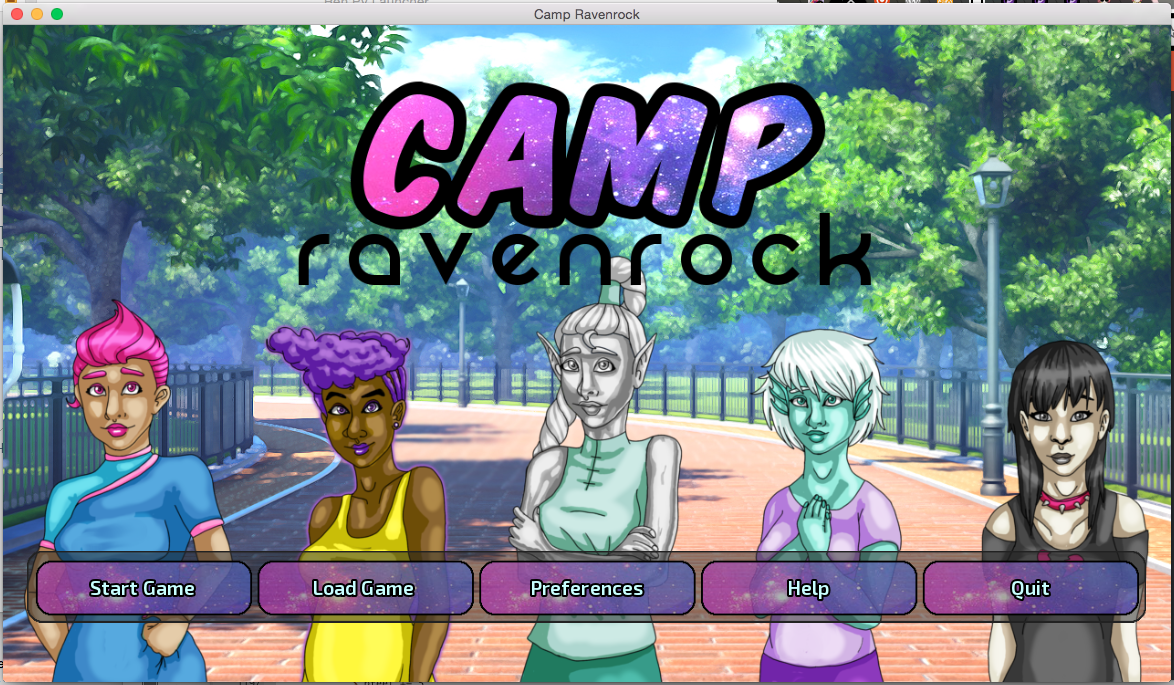 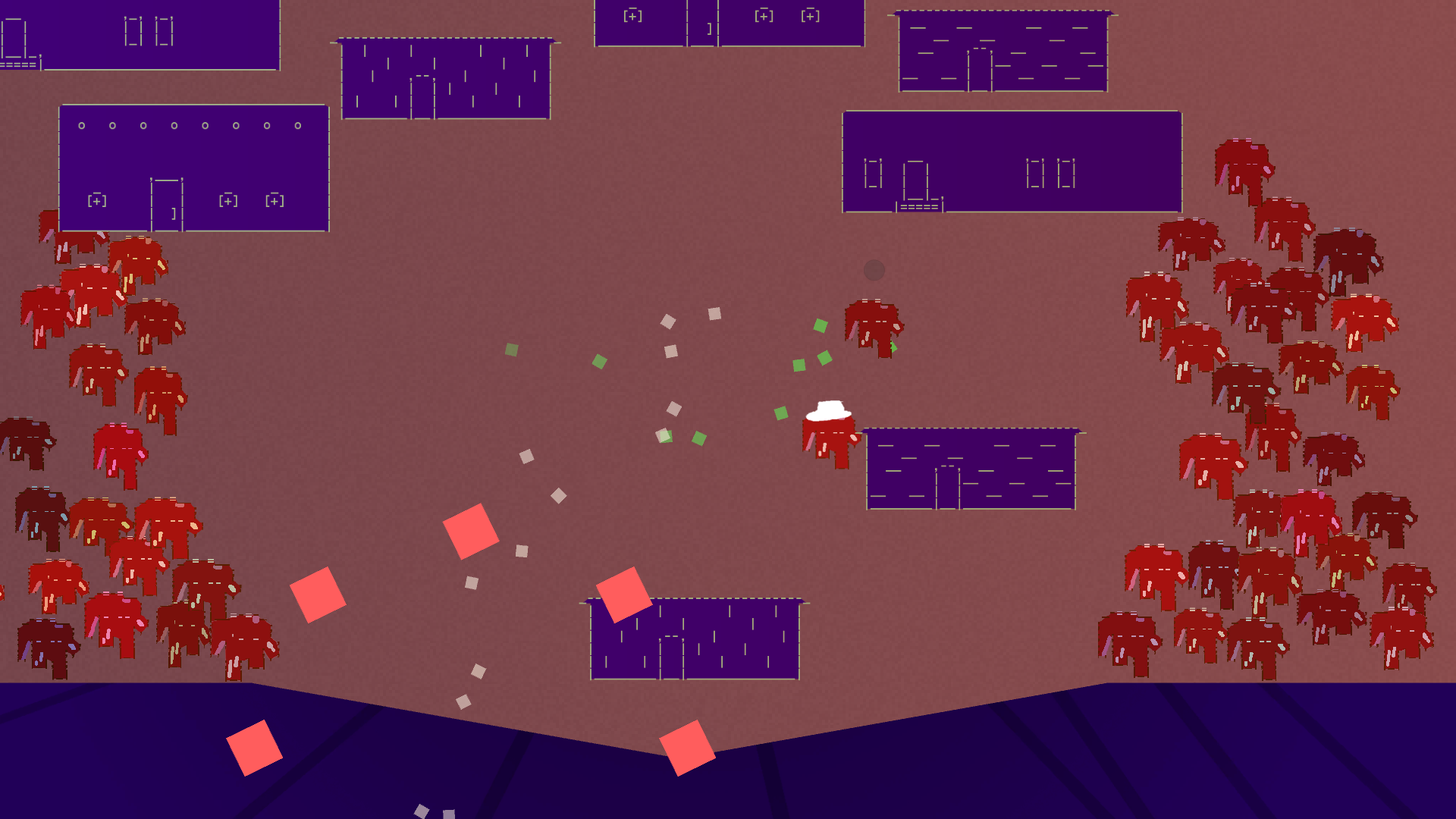 A serial visual novel/mech brawler about four gay disasters beating up neonazis in giant robots made of meat. Get ready for the worst road trip of all time.

A broken fleshmonster from Oklahoma. Her solo work spans over fifty games, and focuses on themes such as queerness, mental illness, trauma, and being crushed by forces outside of your control. One time an old man taught her how to fight wild dogs in an alleyway.

A side-view 1-on-1 beach volleyball game. The objective is simple–score more points than your opponent to win! Players can knock the ball up with their bodies, launch it with a set, or knock it down to the ground with a blazing spike!

A garaduate of the NYU Game Center’s MFA Class of 2017 and currently working at Urban Arts Partnership’s School of Interactive Arts as a full-time faculty instructor in games writing and game design. His current projects include Final Spike, a 1-on-1 local multiplayer beach volleyball game, and Viral Core Busters, an action platformer that focuses on managing risk and reward by wagering on one’s own performance between checkpoints in a level. 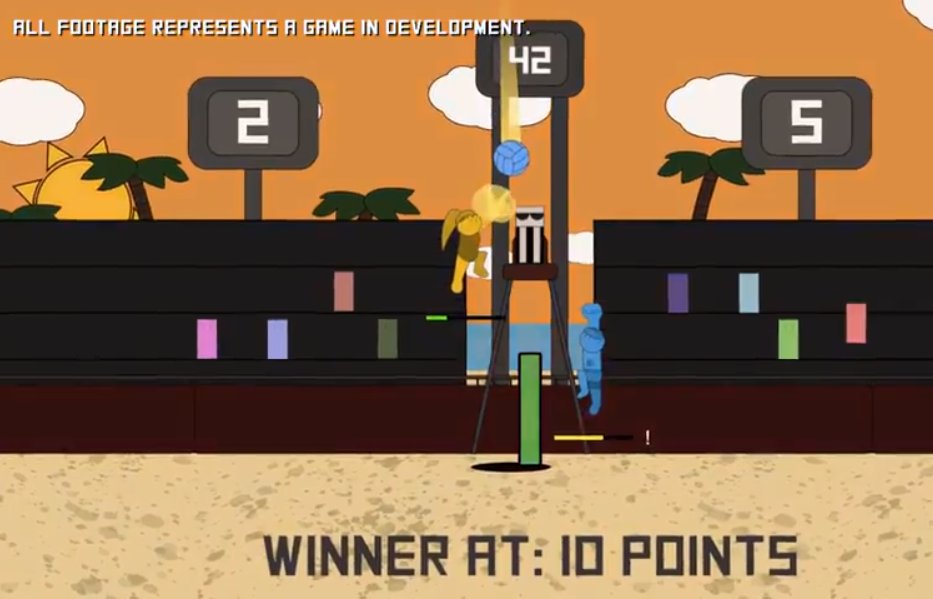 Made in Brooklyn Games

The creator and lead developer Museum Multiverse series and Don’t Look Away, a VR game with over 300k downloads.

Designed Virus Tracker and is interested in how empathy can be cultivated through gameplay.

Proficient in using industry standard software programs for the use of 3D Modeling, 2D Concepting, Voxel 3D Sculpting, Texturing, and Lighting and created assets for the game Moonshot Galaxy while working as a Quality Assurance Tester.

A music composer and Game Audio implementer credited on a number of short films, and several published video games, including most recently the Found Virtual Reality Cinematic Experience for HTC Vive and Oculus Rift.

Museum Multiverse by Made in Brooklyn Games

A virtual and augmented reality puzzle platformer. This 3rd person experience chronicles the adventures of a child that has mysteriously awoken in an abandoned museum. The child must traverse the various worlds that exist within the art pieces within the depths of the cursed museum to find a way to escape. The museum has been abandoned and sealed off, a microcosm of society diminished view of minority artists, and history’s selective amnesia toward contributions of people of color. 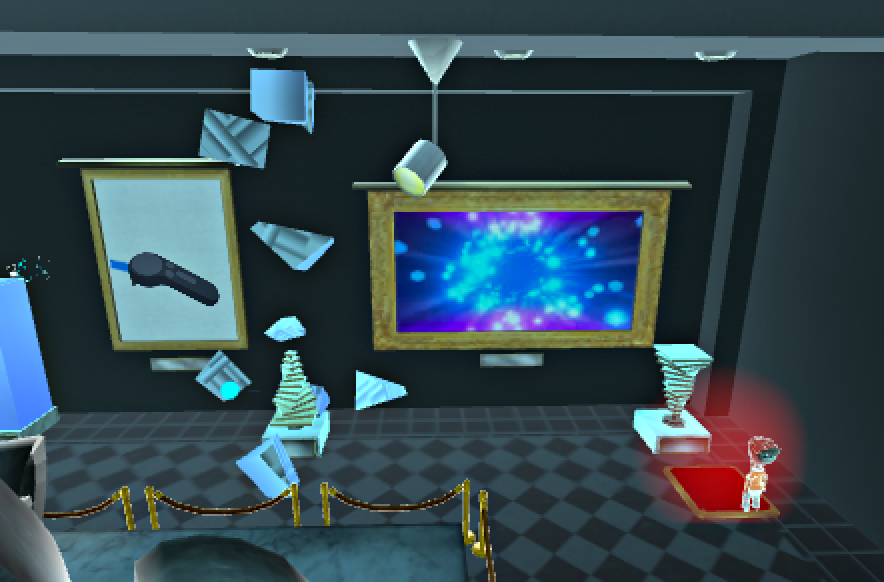 A mix of match-3 and action genres! Participate in the world’s best arena combat sport! Slash slimes and match colors to earn points.

Developers with different backgrounds based in Toronto, Ontario. Can often be found participating in various game jams.

Made possible through the generous support of: 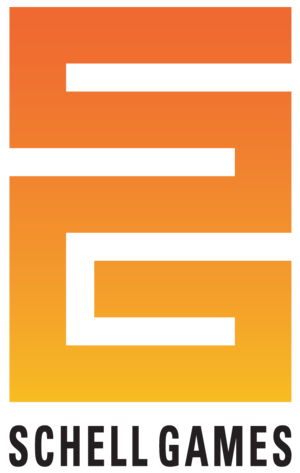 And our wonderful volunteers, developers, and everyone that supported our social media presence! 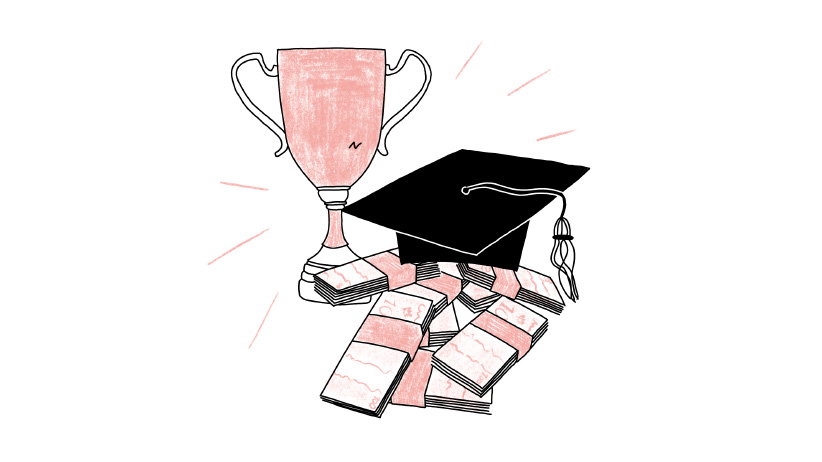 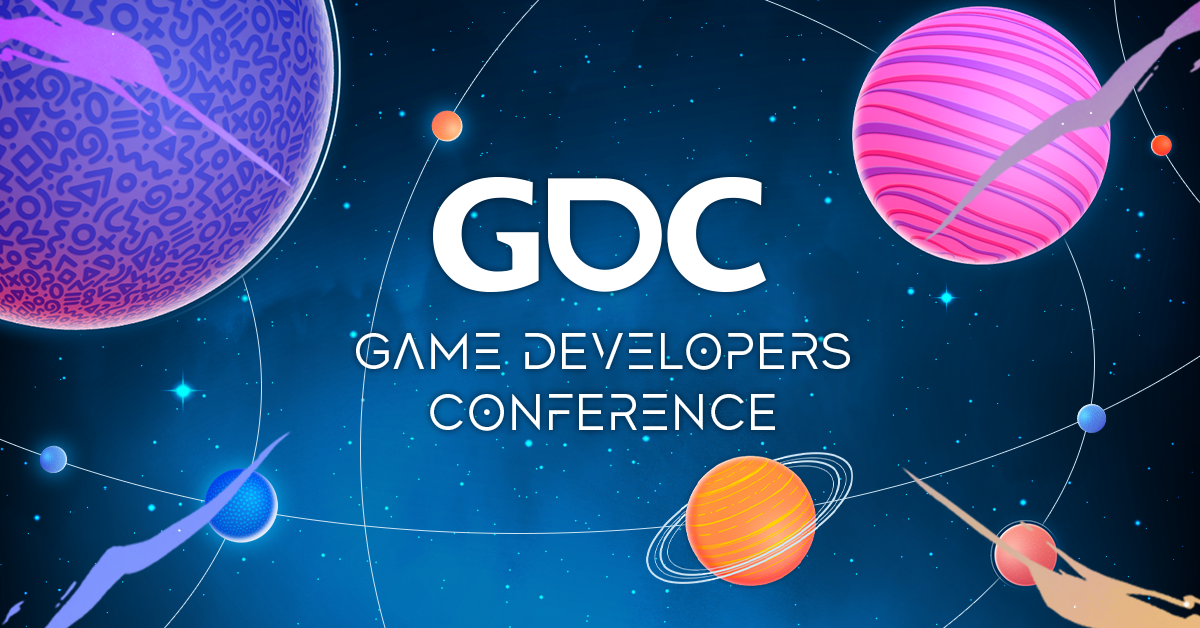 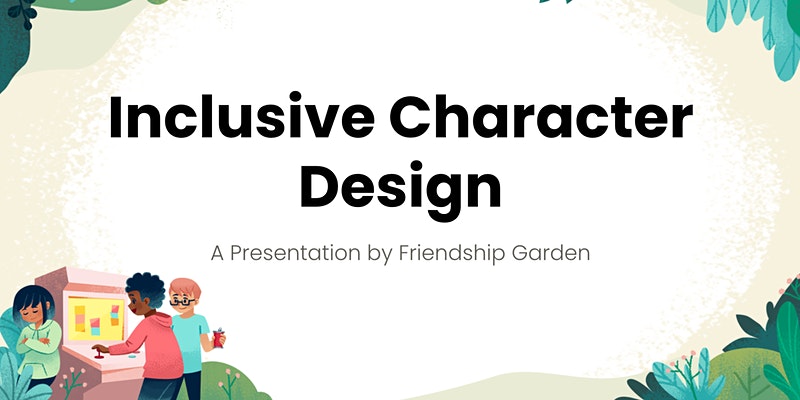 Gameloft Montreal, a leading game developer and publisher established as one of the top innovators in its field since...